‘At Its Heart Wokeness is Divisive, Exclusionary, and Hateful’ – Elon Musk:

In their interview with Elon Musk, The Babylon Bee boys brought the funny. But what viewers might not anticipate is just how many compelling, thoughtful answers their questions managed to elicit from the billionaire. The group started out sharing a laugh over classic Bee headlines, with Musk quipping that it’s “actually true that Gavin Newsom is U-Haul salesman of the year.” But the world’s richest man quickly grew pensive, reflecting on what has happened in recent years to the state he once called home. “California used to be the land of opportunity. Now it has become sort of the land of over-regulation, over-litigation, and scorn,” he observed.

From the collapse of California, the discussion turned to the collapse of mainstream comedy, which Musk ascribed to an unwillingness to punch left, no matter how warranted. That, he explained is how he became a Babylon Bee fan – because satire sites like The Onion began to focus more on upholding a liberal narrative than telling jokes. “It used to be much more even handed, the Onion,” Musk said. “And then they just got the woke mind virus.” He had much the same criticism of Saturday Night Live, a show he guest-hosted in May, to the consternation of several cast members who publicly objected to his appearance.

Black Lives Matter (BLM) activists told students that they live in a “misogynistic, masculine society” that claims “women should stay at home” to cook and clean and that as black women, they are “overlooked a lot” and encounter people who want to harm them because of who they are, according to a video. Four female activists with Indy10 Black Lives Matter, Jessica Louise, Kyra Jay Harvey, Michelle Anastasia and Leah Derray, gave a talk to over 150 participants during the spring of 2020, where they told students that black people often don’t have the same opportunities as their white counterparts, according to a video of the lecture given to students at the K-8 Butler University Laboratory School 60. The DCNF obtained the video from Tony Kinnett, district science coordinator & instructional coach for Indianapolis Public Schools (IPS) and founder of Chalkboard Review.

Derray said she and her fellow activists like what they do because it allows them to speak at schools and engage people about “the history of revolution and activism in this county…as it relates to black people.” The women also said they “fight against police brutality,” and legislative bills that they think don’t benefit the community and initiatives like “defund the police…so they [police] will not hurt anyone else.” The lecture was part of a “Racial Justice Speaker Series,” which serves students in kindergarten through 8th grade. During another lecture in the same series, the district’s top equity administrator, Dr. Patricia Payne, spoke to students for over an hour, where she told them that their black peers are sometimes considered “less than” and encouraged them to “stop all this madness,” by becoming activists. 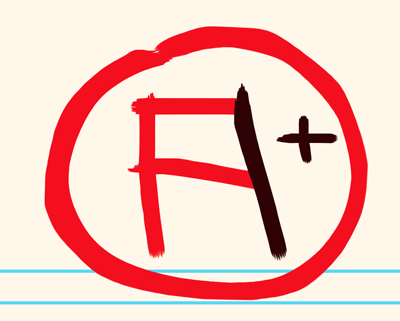 High school students studying in some of California’s largest school districts will no longer be given a D or F grade for poor work, and will instead be allowed to take the tests or complete the work again. The new system has been introduced due to the pandemic, with supporters arguing that it reduces the stress levels for already-traumatized and unsettled students. Proponents say it will particularly help black, Latino and lower-income students, who have statistically been disproportionately affected by pandemic upheaval to school routines. Critics say that it dumbs down education, leaving students unequipped to cope with the harsh realities of the modern world.

The Salvation Army has gone woke. The charity is asking its white donors to do more than just drop some coins into the kettle when they go shopping this holiday season. Leaders of the Army want whites to apologize for being racist. “The desire is that Salvationists achieve the following,” the Army says in an online “resource” titled “Let’s Talk About Racism,” listing several goals including to “lament, repent and apologize for biases or racist ideologies held and actions committed.” The resource claims Christianity is inherently racist and calls for white Christians to repent and offer “a sincere apology” to blacks for being “antagonistic…to black people or the culture, values and interests of the black community.”

In the state of Washington, convicted male felons who identify as women have been transferred to the Washington Corrections Center for Women, formerly the only women-only prison in the state, and have in some cases sexually exploited the female inmates residing there. The policy, which was effectively rubber-stamped by Washington’s Democratic governor Jay Inslee, has not yet been codified into law as it has in California, but the practice is already wreaking havoc across the state’s prison system, former and current employees at the Washington Corrections Center for Women say. 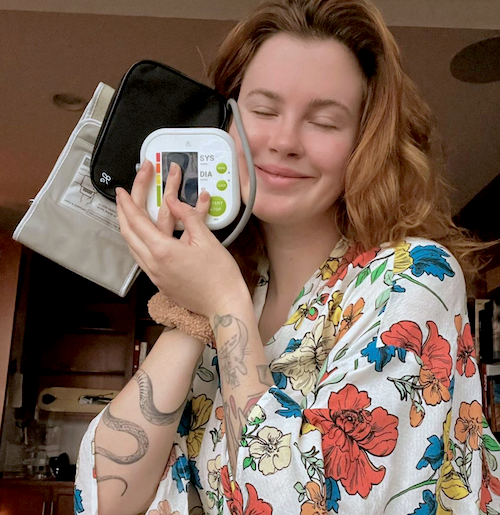 Ireland Baldwin has such severe anxiety that she uses a blood pressure machine to make sure she isn’t having a heart attack. “This is not an ad for a blood pressure machine….I am posting this for whoever suffers with anxiety and anxiety disorders like I do,” Ireland, the 26-year-old daughter of Alec Baldwin and Kim Basinger, wrote in a post to Instagram.

Here’s a sentence that could have been written basically anytime since 1999: Gas prices are really high. But this year it’s different. Like way too many things in 2021, it’s worse. Per The Wall Street Journal, gas prices are up 50% YoY, the largest percentage jump in 10+ years.

Nationally, the average price for a gallon of regular is up to $3.39 from $2.27 a year ago. The record is $4, set in summer 2008. Prices vary by state depending on local taxes, regulations, and energy infrastructure. Two stark examples:

While tapping into reserves could help lower prices, American producers have been slow to ramp production due to pressure from investors to limit environmental harm, creating a lose-lose situation:

On the bright side, analysts believe electric vehicles will be cheaper to make than gas vehicles as early as 2027, which could make the concept of gas prices (and endless complaints about them) a thing of the past.

SOUTH OF THE BORDER 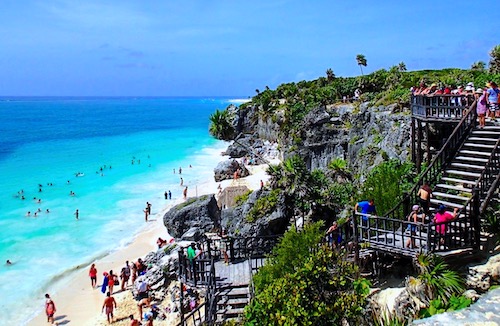 Two foreign female tourists were caught in a crossfire between rival crime groups and shot to death in 2021 in the high-end resort town of Tulum, Mexico. Three other people were also wounded when the firefight broke out in the popular restaurant, La Malquerida, not far from the beach. Of the two women who were killed, one was from Germany and the other India. “They were just in the wrong place at the wrong time, and got caught in an exchange of gunfire between competing drug traffickers,” said a high-ranking Mexican police commander, who agreed to speak with The Daily Beast on the condition of anonymity. “It’s a sad mistake for the victims, but such cases are not rare or unusual anymore [in and around Tulum]. When a firefight breaks out no one is safe,” the commander said. A playground for celebrities like Gwyneth Paltrow, Tulum is famous for its Mayan-era ruins and pristine beaches. But Tulum and the rest of the Riviera Maya are increasingly becoming inundated by cartel violence. An American firefighter was kidnapped and murdered from an all-inclusive resort in July. In June, another American was wounded in a shooting that killed two other people when gunmen opened fire from jet skis. A man was executed outside a law office in Cancun in August, prompting additional headlines about how violence “continues to take over” in the region. A report by Mexican news outlet La Reforma indicated that at least five cartels are now operating in the Riviera Maya and reports of violent crime in Tulum alone had gone up 783 percent since 2019. 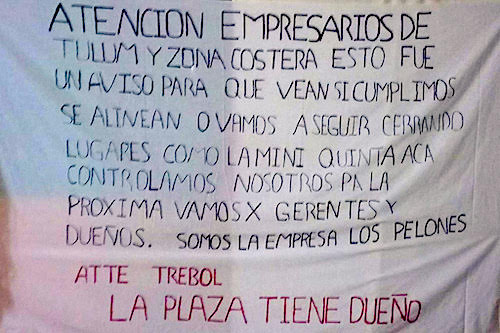 The hand-printed signs, in neat block letters, appeared in the Tulum marketplace the morning after two tourists were shot dead and three others wounded at a roadside eatery in the bohemian Mexican resort town. “Attention merchants of Tulum…this was a warning,” said the sign, which went on to threaten “managers and owners” of bars and restaurants on the “Mini Quinta” tourist zone. That’s where the foreigners, visiting the Malquerida Bar in 2021, had the bad luck of getting caught in cartel crossfire. The signs were photographed by a local citizens’ advocacy group, which posted them to social media. The message threatened death to merchants who refuse to fork over bribes to the drug-trafficking gangs and was signed by Los Pelones – “the bald ones.” The gang has been a longtime enforcer of the Gulf Cartel, whose battle against their archrivals – the ferocious Jalisco New Generation Cartel and Sinaloa Cartel – has recently resulted in shocking gangland-style violence along the Riviera Maya, a sun-drenched stretch of beaches on the Yucatan Peninsula that is Mexico’s biggest tourist hub. Things have become so dangerous that Mexico’s President Andres Manuel Lopez Obrador announced the creation of a “tourist battalion” – 1,500 National Guard soldiers wielding automatic weapons to keep visitors safe. Beginning next month, the soldiers will be stationed in Cancun and surrounding areas, including Tulum, where Mexican law enforcement said there are 10 groups fighting for drug dominance in the picture-postcard resort town.

Cartel monsters have hung nine bodies from a bridge in a chilling warning to rival gangs amid a bloody Mexico turf war. A tenth victim was also found on a nearby road by horrified residents in the Zacatecas municipality of Cuauhtémoc. Officials warned the disturbing display was likely to be linked to a savage dispute between ruthless criminal gangs that operate in the area. The nine bodies were eventually removed from the overpass by police at around 10 a.m. local time, as locals went about their day. According to local media, the majority of the deceased were identified as residents of the small town Cuauhtémoc, which has a population of just 6,660. “They pay for the sins of others, it is not fair that they do this to us because they pay for the sinners,” one spooked local told TV Azteca Noticias. Another added: “It’s scary to go out at night. You have to go to sleep early and every night there is noise, motorcycles, screaming, things like that.”

Tell Your Story in the LBN Examiner:

“The Best Promotional Deal on the Web”

The cost is a mere $250 payable via PayPal or credit card. This is (by far) one of the best deals in the world of digital promotion and only available to LBN subscribers. 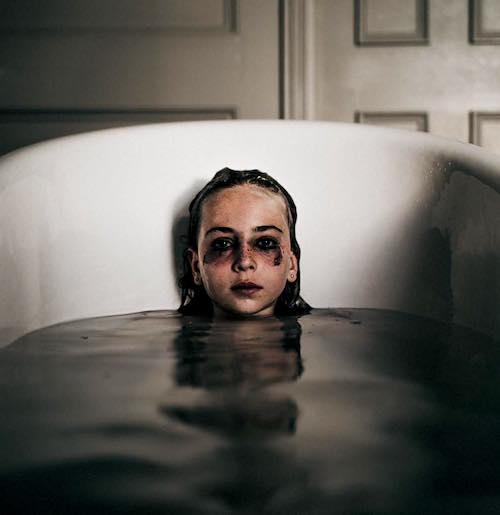