If your politics lean right, you likely didn’t hear that Sen. Rand Paul says COVID-19 survivors should ‘throw away their masks, go to restaurants, live again’.

If your politics bend to the left, you probably didn’t hear that Trump’s Attorney Sidney Powell said ‘We’re Fixing to Overturn the Results of the Election in Multiple States’.

Public health experts have said over and over again that one key to slowing the spread of the coronavirus this winter is limiting holiday celebrations to people in your household, if possible. But a new online survey says just under 4 in 10 Americans will follow that guideline. The poll by the tracking site Covid Near You and SurveyMonkey found that 37 percent of people plan to celebrate Thanksgiving with friends or family they don’t live with—and the number could go even higher, since about a quarter of the respondents weren’t sure what they were doing yet. The survey did find a political trend: just about half of Republicans plan to attend these get-togethers, while less than 30 percent of Democrats or independents said they would. In addition, two-thirds of those traveling don’t plan to get tested before or after their trip.

*MOVEMENT RIP-OFF- ‘YOU ARE NOT HELPING US’: BLACK LEADERS REBUKE ANARCHIST FOR HIJACKING RACIAL JUSTICE MOVEMENT:

Several black leaders and community activists in Portland said that anarchists have hijacked the racial justice movement in America by perpetuating violence. Anarchists attracted significant media attention nationally over their roles in the riots, looting and arson that erupted following the death of George Floyd in May. While many black activists view President-elect Joe Biden’s victory in the 2020 election as an opportunity for social justice reforms, anarchists essentially view Biden and President Donald Trump as bedfellows defending a capitalist economy they seek to dismantle.

Black community leaders and activists have said that the anarchists’ actions, like setting a building that houses a police station and black-owned businesses in Portland on fire, weren’t helping black Americans. “When I hear about somebody burning something down, I think about that as an act that’s always been used against black people,” Ron Herndon, a longtime black activist, said at a news conference the morning after police used tear gas to disperse protesters firing paintballs, the LA Times reported. “You are not helping us.”

*SAN FRANCISCO CONSIDERS $1,000 FINES FOR PEOPLE SMOKING TOBACCO OR CANNABIS IN THEIR APARTMENTS:

San Francisco politicians are considering yet another policy that would harm renters while infringing on property rights: a ban on smoking inside private apartment buildings.  On Thursday, a committee of the city’s Board of Supervisors voted to advance a bill that would ban smoking inside private dwellings located in apartments with three or more units. The San Francisco Examiner reports that the restrictions would apply not just to tobacco products, but also to smoking marijuana and even to vaping. The goal, according to bill sponsor Supervisor Norman Yee, is to protect nonsmoking apartment dwellers from the fumes of their inconsiderate neighbors. 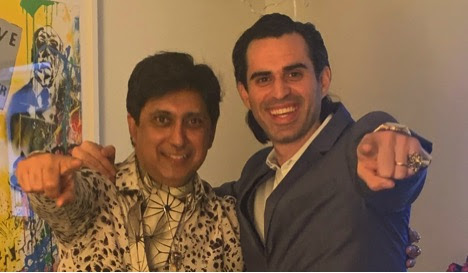 New York and Cambridge, MA based startup, Reulay, may be having an identity crisis, but it hasn’t stopped them from an early win at Startupalooza in New York City. The event, held on September 30, 2020 featured six other New York based companies and Reulay’s mission, vision, business plan and energy got them the unanimous vote for best startup. The startup founder and CEO, Patrick Candela, together with the co-founder and Chief Medical Officer, Srini Pillay, M.D., are both excited about this recognition. “While this isn’t the Nobel Prize in medicine”, said Pillay, “it’s really helpful and encouraging to have this recognition so early in our development. It’s long hours and a lot of navigating and connecting.” “We’re still in stealth mode”, added Candela, “but we’ve gotten a lot done.” When asked why they say that they have an identity crisis, the startup founders say that they are using technology—virtual reality and mixed reality and machine learning—to be specific—to deliver an experience that they hope will elevate the human experience and save lives. In essence, they say that too often, technology startups get infatuated with the technology, when in fact, it’s the human experience that matters. Says Candela, “We never want to lose sight of this. We’re not just a technology company. We’re a human experience and longevity company first.”

Reulay has filed patents for an omnichannel virtual platform that will use machine learning to deliver a proprietary brain-based mixed reality experience with a view to not only decrease stress, but impact the genes that stress can change before it opens up pathways to cancer, heart disease, stroke, and Alzheimer’s disease. Pillay, former top medical student, a Harvard-trained psychiatrist who graduated at the top of his class, and a brain-imaging researcher who also worked in biotechnology across all medical diseases explained, “For years now, there has been tremendous research showing us that certain kinds of stress can literally change our genes. For example, stress causes a process called methylation that can lock genes, making it impossible for cells to divide normally. Down the line, this takes a toll on the body. We believe that this is an important contributor to disease.” He adds, “While certain types of stress can be good for you, a study out of Germany in March this year showed that occupational stress is particularly impactful in altering genes in this way. That’s, in part, why we are starting to deploy this in the workplace. And we are proud to be partnering with the leading leadership development companies in the world to do this.”

Candela excitedly explains that when he and Pillay met, they were both struck by their synergies of interest in consciousness, the body, humanity, and technology. “It wasn’t long before we realized that we were simply carrying out a process that we were meant to advance.” He humbly adds, “We’re a long way from refining this solution. It’s also not a one-size fits all kind of thing” Says Candela, “At Reulay we often say we’re all explorers in unchartered territories – looking for other explorers and creators who are mission aligned to join us. One focus now is assembling this team of world class talent across art, biotechnology, mixed reality, and machine learning. We are overjoyed with the response of those wanting to join us and contribute to a deeper understanding of illness, but even more so, that we believe strongly that we will be able to do something about this.”

Pillay explains that their pipeline is evolving. In addition to their brain-based anxiety-reducing technology, they have also filed patents for a cyberdelic—a technological way of simulating the effects of psychedelics on the brain. He adds, “Psychedelics have a history of dramatically allowing people to reconstitute themselves, but the bad trips and unknown effects of certain doses can limit the use. We believe we are adding to the quest in alleviating depression and anxiety by offering a mechanism to control the dose and experience. At the very least, it is likely to add to the power of the work that is being done in this field.”

When asked what their moonshots were, the two looked at each other amused. New to their pipeline is an augmented-reality paradigm that will be used to help astronauts and travelers who experience anxiety when traveling to outer space. They are combining forces with Martine-Nicole Rojina in Munich Germany, to design this paradigm. Rojina has been studying “no gravity” conditions and sound relationships with the moon for a while now. Next for Reulay is finding the right brand partners. “We’re a broad thinking group that can’t afford to be categorical. You don’t combine the human condition, brain science, technology and design by narrowing your field of vision.”, explains Pillay. “So, we’re researching companies as varied as Louis Vuitton, Apple and Netflix.” “And we’re starting our first round of investment as well”, adds Candela. “So, we’d love to talk to any brands or investors who are turned on by the idea of living longer and saving lives.”

For now, Reulay plans to hard-launch at the end of January 2021. It is completing studies with “The Mayo Clinic” and “Blue Shield of California” with preliminary results to add to its dataset. The two founders are knee deep in execution right now, but being human, they are having a ton of fun, living through the ideal of making revolutionary strides that connect mind and body, so that people can live their lives to their maximum potential, passionate, healthy and worry-free. If you’re interested to talk or partner, Patrick and Srini are reachable at solutions@reulay.com

According to French heritage law, the Mona Lisa cannot be bought or sold. The painting belongs to the public.

Sophia Loren photographed at home by her son Edoardo Ponti, who helmed her new movie.

Mars, the company behind M&M’s and Snickers, is acquiring the maker of Kind bars, the snacks that celebrate their lack of artificial flavors and preservatives, company executives said. The deal for Kind North America comes three years after Mars, a privately held giant in the candy industry, took a minority stake in the company. The purchase was confirmed by company executives. Terms were not formally announced, but people with knowledge of the deal said it valued Kind at about $5 billion.

*EXAMINER: BARACK OBAMA – WHITE HOUSE WAS ROUGH ON OUR MARRIAGE:

Barack Obama‘s time in The White House was full of challenges … not the least of which he says was his relationship with the First Lady. The former Prez opens up about his 8 years in office in an upcoming memoir called “A Promised Land” … and one of his most interesting anecdotes is about how the Presidency took a toll on Michelle. Obama says he could sense an “undercurrent of tension in her, subtle but constant,” despite her own achievements and growing popularity … and their roles in America’s First Family amplified all of the stress involved. Barack says … “It was as if, confined as we were within the walls of the White House, all her previous sources of frustration became more concentrated, more vivid, whether it was my round the clock absorption with work, or the way politics exposed our family to scrutiny and attacks, or the tendency of even friends and family members to treat her role as secondary in importance.”

He adds that he became wistful many nights while he was lying next to Michelle thinking about the time before he was Prez “when everything between us felt lighter, when her smile was more constant and our love less encumbered, and my heart would suddenly tighten at the thought that those days might not return.” The poignant excerpt from Obama’s 768-page book — which comes out next week — is just one of many interesting topics he touches on … including his historic 2008 election, racism, and of course, Donald Trump.