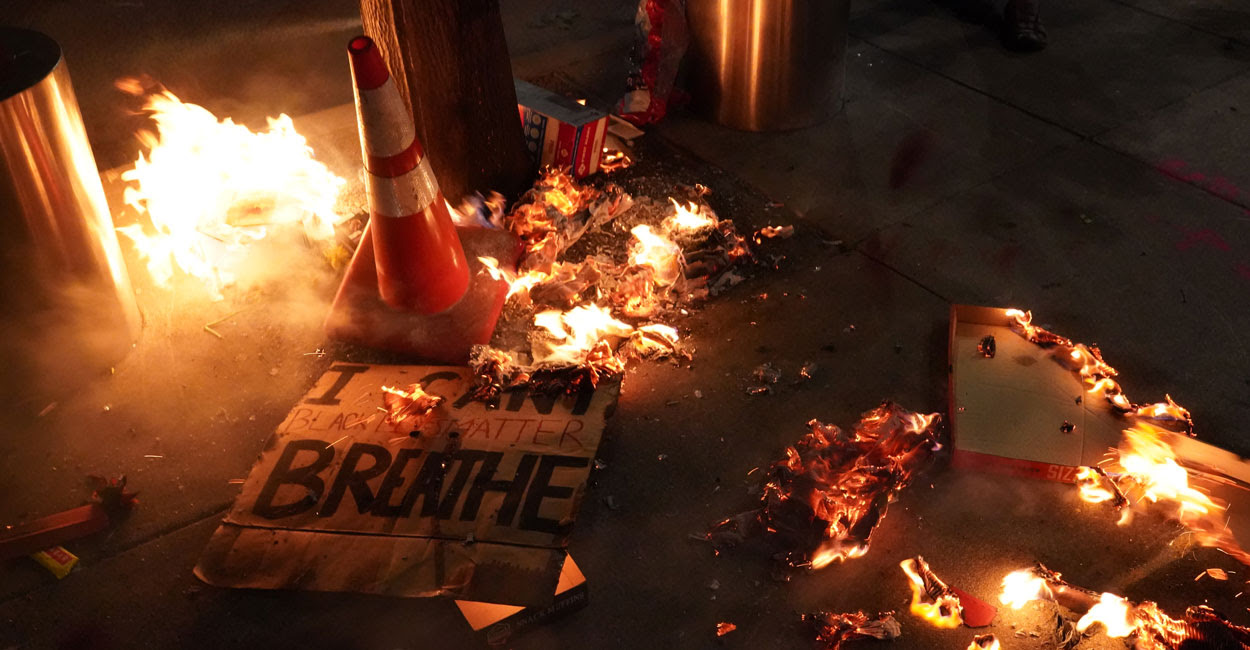 Dozens of news outlets published content that either justified or explained away rioting and looting in the initial weeks of unrest following the police custody death of George Floyd in late May, a independent review found. While President Donald Trump and Democratic presidential nominee Joe Biden have both condemned rioting and looting, major news outlets such as CNN and MSNBC have appeared to downplay the unrest that has gripped American cities in the months following Floyd’s death, in one instance describing a scene as “mostly peaceful” as fires raged in the background. But as the violence broke out in American cities in late May and June, dozens of news outlets provided a platform for commentators, professors and activists who not only acknowledged that rioting and looting were taking place, but sought to either justify the violence as a valid protesting technique or as a form of righteous rebellion against an unjust system.

Here are 31 articles, opinion pieces, interviews and news segments published in the media in the first three weeks following Floyd’s death that pushed narratives that either justified or explained away the rioting and looting as it started to break out in American cities.

Narrative 1: Rioting is patriotic, and it works
A common narrative pushed in the media as violence broke out across the United States in late May was that rioting is a quintessentially American activity with a storied history of bringing about positive change. Rolling Stone was among the first outlets to push the message on May 29 when it republished a story originally published in 2014 during the Ferguson riots titled “9 Historical Triumphs to Make You Rethink Property Destruction.”

The “historical pedigree of property destruction as a tactic of resistance is long and frequently effective.” argued the article, which was co-authored by Jose Martin, a known alias of a Washington, D.C. Antifa leader who currently faces multiple felony charges in connection to a mob attack against two Marines in 2018. Like many of the articles that pushed this narrative, the Rolling Stone story cited the 1773 Boston Tea Party as proof of the positive change rioting can bring about.

“Workers had produced that tea, capitalists had risked investment on it, and it was not the colonists’ to destroy, but they said ‘fuck property rights’ and did it anyway,” the Rolling Stone article states. “Today’s conservatives don’t seem bothered by this inconvenient history, though, because think of the dress-up opportunities!” Rolling Stone editors added a note to the story when it was republished that stated: “Protests erupted in Minneapolis, and have since spread across the country. Once again, some are criticizing the destruction of property as somehow equal — or worse — than the destruction of lives.”

Other news articles, opinion pieces and interviews published in the weeks following Floyd’s death that suggested rioting was either effective, patriotic or both include:

Many articles that addressed rioting in the aftermath of Floyd’s referenced Martin Luther King Jr’s famous 1967 speech in which the civil rights icon said, “a riot is the language of the unheard.” King in that same speech also called rioting “socially destructive and self-defeating” and pledged to “continue to condemn riots, and continue to say to my brothers and sisters that this is not the way.”

Arwa Mahdawi, a columnist with The Guardian, used King’s quote to argue in a piece titled, “If violence isn’t the way to end racism in America, then what is?” that suggested violence was the only remaining option on the table to end police brutality in America. “[King’s] speech was 53 years ago and America still isn’t listening,” Mahdawi wrote. “The uncomfortable truth is that sometimes, violence is the only answer left. We like to pretend otherwise, which is why civil rights movements are often conveniently sanitized.”

Chicago Tribune columnist and editorial board member Steve Chapman also questioned whether black people can affect change without resorting to violence in a piece titled, “If riots are not the answer, what is?” “Impossible to justify, yes,” Chapman said of the riots in late May. “Impossible to understand? Not at all. Police have participated in a quiet riot against black people for generations.” “I find the destruction tragic, unnecessary and counterproductive,” Chapman wrote.

“But if I were a black person living in Minneapolis, I might feel enough anger and despair to take part.” “Rioting may not bring about the changes that would establish genuine equality for black Americans. But neither has anything else,” he concluded. Other articles that suggested that rioting and looting were valid protesting techniques include:

A third narrative that arose in the days and weeks following Floyd’s death came in the form of articles that suggested it’s incorrect to describe violent scenes of rioting and looting as such. Other articles and commentary suggested that destroying property isn’t actually an act of violence. Teen Vogue columnist Jenn M. Jackson said the terms “rioters” and “looters” were negative terms used to ‘delegitimize” movements in a June 11 piece titled, “Don’t Let Them Bad-Mouth Rebellion or Riots: How We Name Movements Matters.” “These words matter,” Jackson wrote.

“The negative associations of these terms have an impact on how we think about these demonstrations, just as the terms like ‘uprising’ and ‘rebellion’ offer ways to think about these protests as good trouble.” “When marginalized people respond to injustice, it is the duty of those in power to sit down, be quiet, and listen to what they have to say without dictating the terms of whose language is acceptable,” Jackson concluded. “Whether that expression comes in the form of peacefulness, anger, rage, or violence, it’s all justified. It’s time to focus on the message instead of the medium.”

TIME published an article on June 8 titled, “‘A War of Words.’ Why Describing the George Floyd Protests as ‘Riots’ Is So Loaded,” that said the word riot “connotes meaningless violence… But it also has a racial dimension in the U.S., as a term that’s long been used (by white people) to drum up the image of black people wreaking senseless chaos in cities.”

The article quoted multiple college professors who proposed other terms such as “uprising” and “rebellion” to describe the early George Floyd protests. Harvard associate professor Elizabeth Hinton told TIME that she prefer the term “uprising” because it “really captures the fact that the violence that emerges during these incidents isn’t meaningless, that it is a political expression, and it is communicating a certain set of demands.”

University of California, Berkeley School of Law professor John A. Powell, who according to TIME does not capitalize his name because it’s a slave name, said he prefers the term “demonstration” to the term “riot.” “Riot suggests pandemonium,” powell said. “What’s happening across the country and across the world is a call for justice, a call for police accountability, for the recognition that black lives matter too … Rioting detracts from all of that.”

Pulitzer Prize winning New York Times journalist Nikole Hannah-Jones said on June 2 on CBS News that while it was “disturbing” to see property destruction, “destroying property, which can be replaced, is not violence.” “To use the same language to describe those two things is not moral,” Hannah-Jones said.

Other articles that suggested that it was wrong to describe scenes of rioting as such, or that property damage isn’t violence, include: